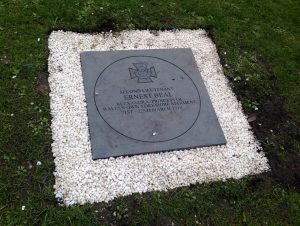 Ernest Beal V.C. Award is awarded to a young person within the Brighton & Hove & District Battalion who shows great commitment to their Company, Church, Battalion and own personal growth. Each Year a young person is nominated by their company captain then they have to sit in front of a interview panel.

After all candidates have been interviewed the panel have the hard task of choosing the best candidate who would live up to Ernest’s legacy.

Ernest Frederick Beal was born on 27th January 1883, his family were renowned in Brighton for the stationary shop they ran in East Street near to the seafront, a shop that Ernest worked in and where he met the love of his life May Bundy. Ernest and his family attended the Congregational Church close to the family home in Lewes Road on a regular basis, and it was here in 1908 that 13th Brighton Company of the Boys Brigade started. The Boys Brigade had been formed in the same year as Ernest had been born however, Ernest had never attended the organisation as a boy.

Ernest interest in Boys Brigade was peaked at around the age of 25 when he became an officer in the organisation.  He’s commitment and enthusiasm for the company made him well liked, and he supported the work without a second thought.  The strength of his commitment still lives in the companies in the city today.  Although 13th Brighton closed down in around 2000 it had been part of the community for over 90 years.

On 22nd September 1914, at the age of 31, he enlisted as a Trooper in the 2/1st Sussex Yeomanry. By the 11th June 1915, he was promoted to Sergeant and was posted on 10th September to the l/lst Sussex Yeomanry serving at Gallipoli and in Egypt. In December 1916 he was recommended for a commission. It is not known where he trained as an Officer but he joined the 3rd (Reserve) Battalion Alexandra, Princess of Wales’s Own, Yorkshire Regiment in September 1917 and was posted a month later to D Company of the 13th (Service) Battalion on the Western Front. Second Lieutenant Ernest BeaI was awarded the posthumous Victoria Cross for conspicuous bravery on 21st March 1918 at Saint-Léger. On the following morning, he was killed by a
shell, aged 35. His name is listed on the Arras ‘Memorial to the Missing’ in Pas-de-Calais, France. The announcement was made in The London Gazette on 31st May 1918 and his parents received his posthumous Victoria Cross from H.M. King George V on 3rd July at Buckingham Palace.
Citation
‘For most conspicuous bravery and determined leading when in command of a company detailed to occupy a certain section
of trench. When the company was established, it was found that a considerable gap of about 400 yards existed between the left flank of the company and the neighbouring unit, and that this gap was strongly held by the enemy. It was of vital importance that the gap should be cleared, but no troops
were then available. Organising a small party of less than a dozen men, he led them against the enemy. On reaching an enemy machine gun, 2nd Lt. Beal immediately sprang forward, and with his revolver killed the team and captured the gun. Continuing along the trench he encountered and dealt
with another machine gun in the same manner, and in all captured four enemy guns, and inflicted severe casualties. Later in the evening, when a wounded man had been left in the open under heavy enemy fire, he, regardless of danger, walked up close to an enemy machine gun and brought in the
wounded man on his back. 2nd Lt. Beal was killed by a shell on the following morning.’

The list of Winners of the Ernest Beal VC Watch 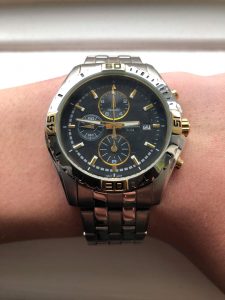